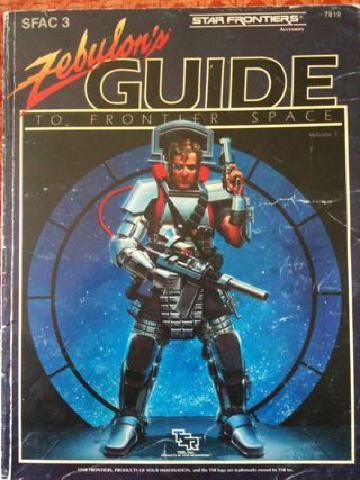 My tattered copy of Zebulon’s Guide

But I didn’t care about the rules changes, I was drawn in by the cover of a space marine with some kind of data-monocle attached to his shiny power assault armor.  Wielding both a pistol and rifle, he was ready for combat.  For the longest time, this gaming book was my most prized possession; I’m fairly certain it is the one role-playing book that I have spent the most time perusing.  I didn’t quite have it memorized, only mostly internalized.  And there were pieces missing.

If you look carefully, in the upper right corner of the cover picture you can see the words “Volume 1.” And where there is a Volume 1 there must be a Volume 2, at least so the logic goes in a gaming-information deprived teenager’s pre-Internet mind.  After all, there was so much that was left unconverted: There was no power assault armor or rules for space ships – the two most glaring omissions.

This hope of discovery was in a time before the Internet. A time before I could spent vast amounts of time both seeking and being bombarded with information concerning a game, game book, or what have you.  Discovering a game, at least for me, was a matter of serendipity.  There weren’t any television ads for the games I played (at least none that I was aware of).  There weren’t any public groups that played the games that I played; Turns out they were all around town, but confined to their own living rooms and dining room tables.  Instead, it was a matter of going to the Sci-Fi / Fantasy section of a book store and seeing what they had to offer.

For years, I kept the candle burning for Zebulon’s Guide Volume 2, until one day it dawned on me that I could use the World Wide Web (that’s what we called it in those days) to find the answer. I went to webcrawler.com and searched for Zebulon’s Guide to the Galaxy Volume 2; (I almost typed googled instead of searched).  It turns out, while TSR had initially planned for more volumes, they had opted to abandon the whole line.  It was a strangely sad moment; What I had held dear as a kid wasn’t as important as I had thought, at least according to others.  The market had spoken, and my first role-playing game was put out to pasture.