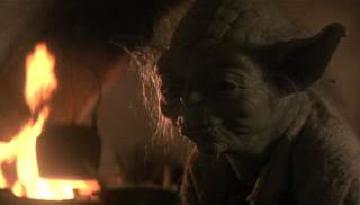 Yoda talking with Luke on Dagobah

This one a long time have I watched. Never his mind on where he was. Hmm? What he was doing. Hmph.

Bloodstone is one of my gaming grails. And I’m thinking it may very well be time to run it.

I’ve had several conversations at different times with Matt and Mike about what made Bloodstone so memorable. The campaign draws inspiration from the Seven Samurai and The Magnificent Seven, but as that resolves the greater story unfolds. There is plenty of politics, intrigue, heroism, and large-scale military conquest.

Over the summer, due to various scheduling conflicts, we’ve had a particularly hard time getting our group together for both the Precious Few campaign and our Scales of War campaign. The last sessions were June 5 and June 26 respectively.

I feel as though I’ve lost momentum for the Precious Few, but I’m working on an idea to wrap this up in two sessions, and possibly this could be done in one session.

The Scales of War campaign marches on, and on the surface has many similarities to Bloodstone. There are a few differences, but one of the key components is that in Bloodstone the characters are the leaders, choosing what to do. Whereas in Scales of War the war council directs the players to go hitherto and yon.

Think about that for a moment. Bloodstone presents the characters with situations that require a response, and gives the GM the tools to handle those responses (i.e. a map of the region, various factions, its inhabitants, etc.). Scales of War, instead informs the characters that a huge war is being fought and they are repeatedly assigned special operations by the ruling council.

It’s All About the System

I maintain that the system you play will strongly inform, and likely even dictate, the type of game you will play. Another way of saying this is determine how you want to play and pick a system to reflect that decision.

Which leaves me to ask what rules system should I use for Bloodstone?  The contenders are: D&D 3E, D&D 1E, Burning Wheel, Dungeon World, Mouse Guard or FATE (i.e. Legends of Anglerre or modified Diaspora). Quite a long list of contenders.

One thing, highlighted in the Diaspora system, but that I’ve been aware of for a while, is the disconnect of character advancement. I’m not so much concerned with advancement, as much as the effect the advancement system has on actual game play.

I have seen, and have been guilty of, pining for that nifty power I’m going to get in 2 levels versus focusing on my character’s current situation and moment.

Certainly, at least for me, there is a joy in watching a character’s mechanical development unfold. But none of this is narratively very memorable. In fact, regardless of how I go about gaining XP, I will eventually gain these new features.

Contrast this with earlier editions of Dungeons and Dragons, where the mechanical advancements were often times limited to improved saves, bonuses to hit, and possibly spells. Only the most bizarre player will look longingly at improving their saves.

I recognize that more than a few wizards at 4th level saying “I can’t wait until next level, because I’m totally going to fry things with my fireball.”

Contrast the above with Burning Wheel’s system for advancement. In order to advance something, you have to “fight for what you believe in.”  Burning Wheel scoffs at the idea of killing 1000 orcs and thus improving your diplomacy.

If you want a powerful Call-On trait, then show everyone how you are getting there. Spend that Artha!

My goal as a Game Master is engaging players in the moment. To ensure my players are engaged, I will bring every tactic and strategy to bear.

Should the Bloodstone game be run using a system that does not readily lend itself to pining for those cool new class features? If so then we will be playing D&D 1E, Burning Wheel, Mouse Guard, or a modified Legends of Anglerre (seeking inspiration in Diaspora).