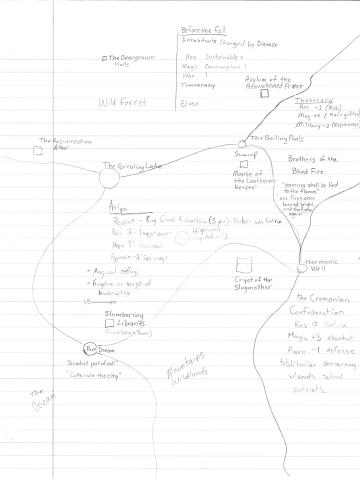 Map for Butcher, Baker and the Candlestick Maker Campaign

This past Sunday, October 9, we sat down to start another Burning Wheel campaign. This one will run on alternate weekends with the Bloodstone campaign.

Prior to the character creation session, Joe provided the initial constraint:  Jaron, Matt, and I were all going to play siblings in a large family (8 or so children). And our grandfather was a powerful sorcerer, long since gone. Our parents were simple farmers, mother died years ago and father disappeared around that time.

While we were waiting for everyone to assemble, I suggested that we needed more of a theme. And I suggested, somewhat jokingly, that the characters should be a butcher, baker, and a candlestick maker. The idea took hold.

Jaron chose to play the candlestick maker, which in Burning Wheel is best done by the peddler. I chose the butcher, leaving Matt with the baker.

But, before we got too far along, we needed to burn up the world. Using a modified version of Legends of Anglerre’s campaign building, we drew up the map. Using Matt Finch’s most excellent Tome of Adventure Design we named our points of interest:

Already an interesting tale was unfolding. The map has an ocean, a wild forest home to a fallen empire of elves, a mountain region, and three countries: Atlya, Brothers of the Blind Fire, and the Cromonian Confederation.

Ruled by a regent until Crown Prince Claud Richardson comes of age. We gave it the aspects of “magical refuge” and “kingdom on the verge of bankruptcy.”  It has a magic index of +3 (i.e. abundant), resources +2 (i.e. major exports), and military action -2 (i.e. espionage). Clearly with abundant resources and on the verge of bankruptcy, taxes are not being properly collected.

Brothers of the Blind Fire

A theocracy dedicated to Aliziac, the Fire that Blinds. The theocracy’s aspects are “sorcerers shall be fed to the flames” and “our fires once burned bright and shall once again.”  It has magic +0 (i.e. rare gifted), resources +1 (i.e. rich), and military -2 (i.e. espionage).

I set about to make my butcher. Given the abundance of magic, and our families history in sorcery, I wanted to play a sorcerer. So I burned up Margeret Whiteguard (Born Gifted (Village), Butcher, Lead to Peasant, Auger).

I was very hesitant to play a woman, in fact this is the first time in my gaming career that I’ve played a woman (at least one that wasn’t changed to a woman due to a magic item). Ultimately I was drawn to the idea of digging through the entrails of butchered chickens as she consults the portents.

As I worked through the character questionnaire, I began working out her backstory. She had in fact given birth to a baby girl, but committed infanticide when Margaret consulted the portents and saw something unspeakable horror in the baby’s future. A few years later, she was pregnant again, and consulted the portents…only to have the exact same divination. With the baby, she fled to her brother and forced him to take her baby girl. She returned to her home village and lived as an impoverished augur.

The other players burned up 5 lifepath characters, while I burned up a 3 lifepath character. Margaret has a very limited skill list: Anatomy B2, Astrology B2, Butchery B2, Falsehood B2, Guts-wise B2, Omen-wise B2, Sorcery B4, and Ugly Truth B2 (10 initial skill points, 2 of which were general skills). She spent most of her resources on spells (i.e. The Fear, Low Speech, and Phantasmagoria).

She is disturbed (Char), misunderstood (Char), has a prominent scar on her face (Char), is gifted (Dt), has the touch of the ages (Dt), and is a dreamer (Dt). Every morning, she consults the portents (Instinct). Through her premonitions, she has vowed to find the family member that is committing vile acts (Belief).

I’m still working on the remaining beliefs, but believe I have quite a bit to hang my hat on.