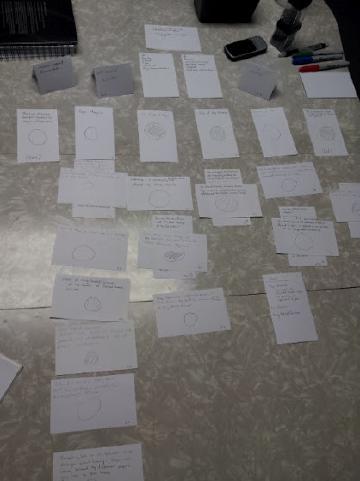 This 4th of July, I went to Nick's house. I had previously met Nick once before, we we got together about 8 months ago and played Fiasco. Both of us didn't know if there would be 3 players or 4. I packed accordingly; I was prepared to run a Dungeon World conversion of Temple of Elemental Evil. I also brought Fiasco and Microscope.

As it turns out, we had 3 players (self included). And as I was thumbing through my binder, both Nick and David noted that I had Microscope. Having both purchased the PDF, they were interested in playing. I figured why not? After all I had packed it.

We spent a bit of time reading the rules, but eventually I said “Lets just get started.” I think that was the best decision. Microscope's rules are very simple, and are there primarily to provide a better collective experience – One does not power game Microscope.

We decided to simply focus on one of the three Quick Start History Seeds – we chose “A new force changes society, wiping away the old values.” Magical conduits had been discovered and changed the course of history. And with that we were off.

Our bookend Periods were:

The Flow of History

The Houses of Magic – Dark

Rise of the Airships – Dark

Return of the Druids – Light

The pace of the game was deliberate, but engaging. We kept things at a relatively high level of abstraction…never dwelling to long on a Scene, and instead choosing to create more Events than Periods and Scenes.

I love the fact that Microscope creates tangible artifacts. Ferreted away in my backpack are the cataloged Period, Event, Scene, Flavor, and Legacy cards. I have a written, albeit abbreviated record, of the game session.

We ended up playing Microscope for about 3 hours…with a handful of phone call interruptions. Personally, I had a great time, and can see Mircoscope as a valuable tool for creating a collaborative campaign. Both to start the campaign at an end point, or to dive really deep into one of the events.

We used the Microscope game to lay the foundation for our one-shot Dungeon World adventure. There were airships and conniving members of both House Achilles and House Hector.