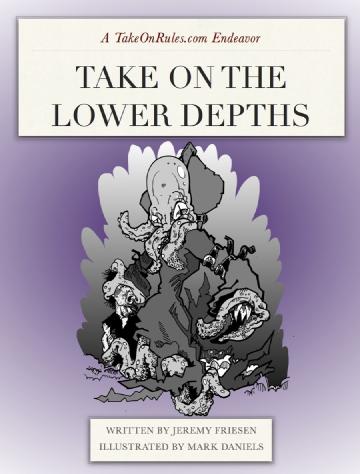 The Prologue that Never Was

In 2008, I learned about Open Game Design during Wolfgang Baur’s “Wrath of the River-King” patronage drive in – This was Kickstarter before there was Kickstarter. I was curious about the model, and I decided to sponsor Wrath of the River King on a lark…I was going through a divorce and decided I might have some additional time on my hands to participate or at least lurk about during the design process.

What I found was an interesting adventure for a new game system (D&D 4E). I also saw an engaged group of gamers, eager and willing to contribute, blurring the lines between consumer and producer, designer and player. And they were still abuzz from Mr. Baur’s recent “Empire of Ghouls” patronage project.

I did some research, and Empire of Ghouls was a re-imagining of Mr. Baur’s Dungeon #70 adventure “Kingdom of Ghouls.” I began digging deeper, and found the adventure intriguing. It was a seed that stuck in my brain.

I was too late to the party to get “Empire of Ghouls” and use it in a 3E game, but I did manage to score a physical copy of Dungeon #70 on the cheap. I quickly read through the adventure, and the scope was impressive. In 29 pages, Mr. Baur had created a mini-campaign – A map with plenty of blanks, action offscreen, dangerous fronts, and grim portents. The simplicity of encounter setup was refreshing and rekindled old memories – especially seeing the then new direction of 2-pages per encounter.

Every so often I would reach for my copy of Dungeon #70, re-read the adventure, and let it roll around in my brain for a bit. With my 2nd Edition books scattered to the wind, I wasn’t ready or eager to convert the adventure to another system – At the time, my personal options for systems were 3E, Burning Wheel, and Diaspora.

As a tangent, I think “Kingdom of Ghouls” in a Diaspora game would be fantastic…there is a terror to having your environmental suit ripped open by a ghoul. And there would be the possibility of breaking out Diaspora’s wargame subsystem. But back to “Kingdom of Ghouls.”

With the development and arrival of Dungeon World, my gaming group and I were like a swarm of ghouls hungry to devour it. The rules had consumed me. The mechanics are simple. The focus is on the narrative. It was a breath of fresh air after choking through constrained 4E adventures that involved gruelingly long combats. And I began kicking around the idea of writing adventures.

My first thought was TSR’s U1 “The Sinister Secret of Saltmarsh”, but it turned out that MJ Harnish beat me to it with his “DW-U1 The Haunting of Highcliffe”. I had even begun converting the Moathouse from TSR’s “T1-T4 The Temple of Elemental Evil.” But for some reason this never stuck.

Then I decided perhaps I should turn my attention to something else. And that is when I once again reached to my copy of Dungeon #70 and began in earnest to convert the adventure. And as I was working on it, I realized that I really didn’t like the cloakers as allies for the true ghouls. It felt so very…lame. I needed something else.

I kicked that around for a bit. I returned to plumbing the adventure for monsters that didn’t exist in Dungeon World. And I figured why not make a few more. Inspiration struck – one of the more memorable near TPKs in which I was a player was a 2E game of Bloodstone in which all but two characters (in a party of 7) were slain when they stumbled into a phase spider lair. So I figured why not began writing the blade and skulk spider. Then I stumbled upon the following passage in “Kingdom of Ghouls”:

Since ghouls feast on a bloodless corpse as readily as a blooded one, the vampires have formed an alliance with conquering undead

I wasn’t going to have vampires be the ghöls major allies, as I believe legions of vampires and ghöls would blur the nature of the ravenous ghöls. I decided to replace the cloakers with spiders. Similar types of creatures, but a lot less lame.

I looked to the D&D monster manuals of 1E and 3E as well as Burning Wheel’s “Monster Burner” for inspiration. And then it hit me…why not create an archetypical spider for each of the archetypical D&D classes – Fighter, Thief, Cleric, Wizard. And thus the curate and eldritch spider were born, followed shortly by the reverent spider – its kind of like a Bard.

The result is that now I have plenty of adversaries for more than one front each with enough space for distinct and possibly competing agendas…because lets face it what the hell is the agenda of a society of cloaks? To be dapper? To acquire monocles and top hats?