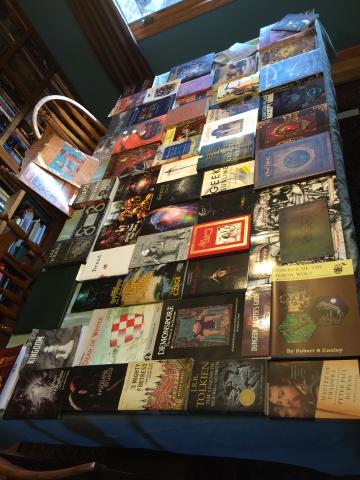 A Year in Review.

Spread out on our dining room table are, what I believe to be, all of the books that I had scattered throughout our house. On a cursory glance I have read to completion 40 or so of the books.

The surprise of the year has been “Shakespeare’s Restless World” by Neil MacGregor. Twenty chapters each with an artifact as the focal point of the chapter: food, plague, espionage, national pride, religion, etc.

This is not all of the books that I’ve read or worked on during the year. I also read:

This coming year, I plan to spend more time reading and creating. This past year has felt as though much of my time has been spent idling away on social media, checking for new content.

As you can see, I have in front of me the raw materials for most any kind of euro-centric medieval-ish role-playing game I’d ever want; And plenty of fodder to make things unique.

For those keeping score at home, from bottom right corner, reading “up” the photo, then starting in the next column from at the bottom: