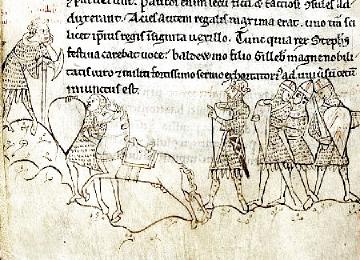 I’m preparing for an upcoming Burning Wheel campaign. I am using the Anarchy of England as the backdrop.

Every great man built himself a castle and held it against the king; and they filled the whole land with these castles. They sorely burdened the unhappy people of the country with forced labour on the castles; and when the castles were built, they filled them with devils and wicked men. The Angle-Saxon Chronicle, placed as the entry for the year 1137, but written in the 1150s. This section comes from The Peterborough Chronicle 1070-1154, ed. C Clark, 2nd edn. (Oxford, 1970); translations include The Anglo-Saxon Chronicle, ed. D. Whitelock et al. (London, 1962)

If the characters crawl the English countryside, I want some more random generators. Five years ago, I was gearing up to run a campaign set during a war. I wrote up a random wartime village generator; I may reuse some of that.

In response to a weak crown, the barons are consolidating their personal power.

What is the State of the Fortifications?

Were these Fortifications Sanctioned by the King?

An unsanctioned castle may draw the ire of the king; Though he has numerous irons in the fire.

When a person’s loyalty to the king is unknown, the GM rolls 2d6 to get their “Loyal to the King” score. Then compare that score to the current “King’s Popularity”:

Throughout the course of play as the “King’s Popularity” rises and falls, this will adjust a person’s allegiance.