I ran my first non-funnel adventure for Dungeon Crawl Classics. I wrote up some advice. At the beginning of this session, I didn’t spend much time setting expectations; We instead focused on leveling up characters.I should have drawn more attention to Mighty Deed of Arms.

Our next session is March 16 at 6pm [Session Report] 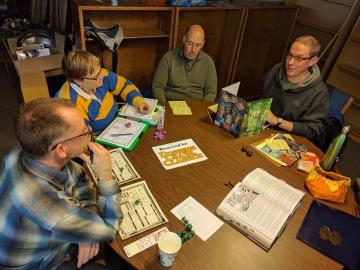 Gathering around the table

Before the adventure I made two random encounter tables. One for Bitterweed Barrow and one for traveling outside of Bitterweed Barrow. I used the tables as a chance to think through what possible events were happening; I’ll try to remember to post these at a future date.

A group without a cleric; I was curious.

A week had passed since the villagers delved into Nebin Pendlebrook’s Perilous Pantry. There were funerals, a search for a new constable, and bickering over the estate of Nebin Pendlebrook.

The adventurers each made a pact to not speak of the wealth encountered. Over the week, they found themselves spending more and more time in the local tavern; Talking of their adventures.

One late afternoon, gathered around a table at the pub, the drunken goat farmer told a tale of the birth of a two-headed goat. Before it expired, the goat said: “Beware, beware the Eyes of Green.”

A little speculation…were the emeralds the green eyes? What else could it be? Regardless, the characters wanted to leave Bitterweed Barrow. They would head to Hirot to see about the deed to the building, and perhaps find out more about the map.

En route to Hirot, they encountered what appeared to be a small roadside shrine. Five straight branches forming a five-sided pyramid. Inside a clay bowl with 5 silver pieces. The dwarf couldn’t help himself…he pilfered the shrine.

Spoiler Warning: If you want to play Doom of the Savage Kings please stop reading.

They drew close to Hirot late afternoon. Seeing a macabre standing stones, used for some ritual sacrifice. As they were inspecting, a mob of peasants andeight mounted warriors drove forward a bound woman. She was the sacrifice to appease the hound.

They learned of the lottery, in which every three days the village randomly choose who to sacrifice to the Hound of Hirot.

Not wanting to interfere too much in a volatile situation, the adventurers opted to head into Hirot. Passing through the gates of the wooden palisade, they saw the locked lottery box in the town square, the large manor house atop the hill, a temple to Justicia, and an inn with a wolf spear sign.

Seek a place for the night, they went to the Inn of Wolf Spear. They found Broegan “Bull” Haverson behind the bar, weeping. The patrons in the common room were sipping their drinks making an effort to ignore him.

Bull’s daughter, Morgan, had lost the lottery; She was tonight’s sacrifice. A bit of back and forth banter, and the adventurers learned from Bull that:

Lloré, the village bard, came in and informed everyone that the villagers had tied Morgan to the altar. Now the waiting for the howls. The adventurers talked with Lloré and learned:

The adventurers were keen on helping Morgan, but wanted first to get the spear and shield. Lloré made a deal, they had 3 hours until sunset. He would take them to the tomb (a 30 minute trek), but at sunset they would make for the stone altar and free Morgan. They agreed, but first spent 30 of those minutes securing some armor (They reached an agreement and borrowed the armor).

At this point, a fourth player stumbled into our gaming lair. I asked if he wanted to join, and he said sure. So I grabbed a sheet of 4 premade characters, and said these were the villagers interested in helping the adventurers end the plague of the Hound of Hirot.

To the Tomb of the Ulfheonar

They arrived to find a sealed entrance. After a bit of exploring (another 10 minutes) they found an alternate entrance and began their tomb exploration. There was now 110 minutes until sunset. Lloré stayed outside and would call when the sun was setting.

They entered the snake shaped tomb through a collapsed section of the mound. The first room had a pile of rubble from the collapse. They lit torches and proceeded further into the tomb, proceeding out the room and down the hall.

At the T, the halfling and dwarf looked both left and right. To their right they saw a long hallway, extending into a large room. At the other end of the room they saw a large door. To the left (and towards the sealed entrance) they saw a hallway leading into a room that had a bowl shaped floor.

They chose right, towards the impressive door, and entered into the room.

The floor is covered by what appears to be thousands of thin, translucent strips of vellum. To your horror, you realize the crackling dried strips are the discarded skins of an untold number of serpents!

The original builders had set door as part of the construction. The door was un-openable. As they left the room, the elves both noticed a small passageway above the doorway. The halfling was quick to volunteer to explore. As did the two elves. They crawled along the 2 foot by 2 foot carved tunnel. It turned right, ran for 40 feet then turned right again.

Halfway along their exploration, the elves again noticed something. Poking and prodding, as they found a passageway leading up, they also heard the growl of a creature.

Combat! A tight and nasty combat ensued with the desiccated corpse of a human. The elf’s mithral armor staving off the worst of the blows. And as the final spear thrust from the halfing dropped the corpse, a horrendous snake burst forth and began a second wave of combat. In the end, the ghoul snake slew the elf before the dwarf slew it (the halfling burned 4 additional luck points to move the dwarf’s miss to a hit and thus deliver the final blow).

The combat went six or so rounds, in part because of poor rolling (with 3 player characters and a 4th joining in the end). The tight confines worked against the adventurers. The elf had lost his burning hands, so continued to spell burn in attempts to slay his attacker.

A bit of exploration and there were two rooms:

The thief secured the spear and drinking horn, while the halfling haberdasher rolled up wolf pelt. The thief learned that the drinking horn had healing properties, and passed the horn to the halfling to heal up his vicious wounds.

In the other room, the adventurers gathered to determine what to do. The wizard opted to cast spider climb to ascend the column. Bedlam ensued as the roof began to collapse, injuring several, and burying the spear and shield in pile of rubble. Despondent and battered, they left to search the rest of the tomb.

The Ambush and Capture

As they were wrapping up their exploration, Lloré yelled into the tomb “The sun sets. Come out.” They paused to decide if they would ignore their promise and continue delving. “You promised! The sun sets, it’s time to free Morgan.” The party heeded his call, and climbed out of the tomb. And into an ambush…

Half a dozen archers, sent by the Jarl, were waiting. A quick battle ensued, and the ambuscade downed 5 or so of the adventurers (killing 2 of the remaining 3 0-level characters). There was a call for surrender, and the still conscious characters surrendered. The archers treated the wounds of the fallen and I drew the session to an end.

House Rule: The party doesn’t have a cleric. I allowed for DC 10 Luck check to bind wounds and stabilize (within the 1st round). I also won’t be applying the Stamina penalty for bleeding out.

I sensed that this session left a bitter taste in people’s mouth. In part, I believe, because magic was somewhat erratic and combat was brutal. But I stand by this game; The system and adventures are challenging and require player skill. I hope, as players continue, that their skill grows and they learn from their less experienced decisions.

I’m enjoying running from a written adventure, providing a charged situation for the players to engage. I love the maps, the flavor text, and the random rumor table.