On Saturday, four players and I delved into the “Ruins of Ramat” by John Adams.

Each player established their mini-marching order. Then I wrote down each character's slot in the marching order and their luck scores. 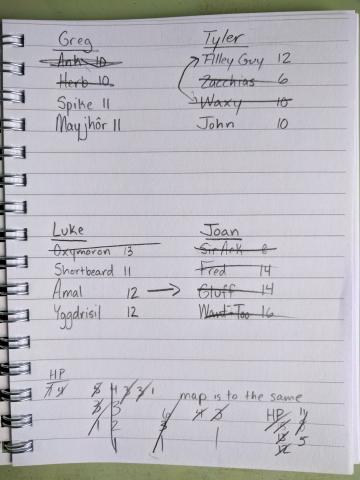 Keeping in mind that we had 2.5 hours to play, I kept my foot on the throttle, moving them through rooms.

Cautious approach to a hole in Rose Hill

There are three directions to take.

They reach a dead end, double back to take another passage.

Onward into a ruined library

They find another secret door, opening it to reveal two more skeletons and a robed skeleton.

A bit of exploration and experimentation and POOF! a bright light and they are in a new room

The guild beggar grabs the spear and she sees a vision of herself, standing on the battlefield, humans, demons, and skeletons lie dead around her. In her right hand, the spear; Her left hand a bloody stump. A large demon approaches and says “Let us not fight. Together we can be so much more.” I ask the player what she does. She throws down the spear. And the vision fades. The spear drops from her hand.

Another character grabs the spear, and sees a similar vision. I ask what he does. He throws the spear into the maw of the demon. He feels a warmth and realizes his life has changed. He understands the scrolls he's read. He asks to see the ivory scroll and knows that it can lift the curse. (I awarded the neutral character 1d3 points of luck for sticking with her alignment). 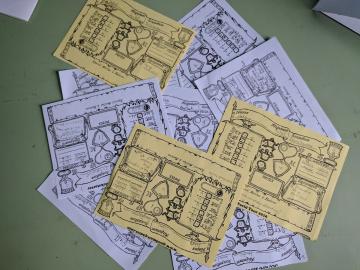 The character sheets of the dead

At this point, we are running close to the end. I guide them to the next room, and I ask if they want me to narrate the final fight the demon. The players think about it, and we agree to play it out. In two quick rounds of furious combat, the rubbery tentacled demon of darkness slays two more characters but is in turn killed by the Spear of Ramat.

We close the session, with each surviving character at 11 XP. I also say that in future sessions people can use these characters. I also awarded each character one point of Luck for defeating a demon and bringing a bit of knowledge of Ramat into the world.