This Thursday was the conclusion of “DCC #66.5 Doom of the Savage Kings” by Harley Stroh.

My instincts told me this session could be a bit challenging; I would be starting the session after the now open-ended conclusion of chaotic scheme of distraction, misdirection, arson, and ultimately triumph. We had ended on a high note, and we would need to work together to draw the characters together.

I spent a bit of time during the week thinking on this charged situation, and came up with some potential directions. At the start of the session the players would roll a d6 three times. Each number that came up would be one piece of information that the Jarl and villagers would piece together. 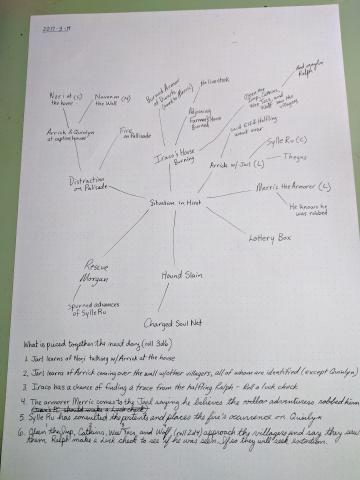 A mind map and random table for session 4

With a charged situation, and many players, I also knew I wanted to plan out some relationship graph (who would betray whom) as well as write up instincts motivating each major player. 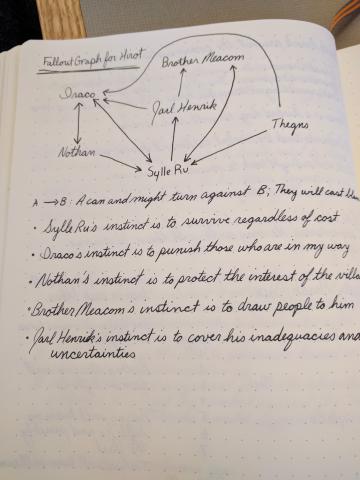 The players didn't know what the results were, but it helped frame the situation. Poor Arrick, all signs pointed to him.

At the standing stones, the adventurers debated on what to do next:

There was a bit of deliberation and they settle on returning to Hirot. A quick reconnoiter reveals the guards on the wall to be half their earlier count. They carry the hound to the gates of Hirot, and announce their victory.

The nightwatch opens the gates. In the town square the whole town gathers in a semi-circle behind:

Behind them are the Thegns, Nothan the Elder, and Iraco's hunters. They have bound Arrick, Ungo, and Obexo. The gist of the conversation is:

The crowd disperses. The adventurers settle in the Wolf Spear Inn and have a night of drinking. Odin insists on drinking through the night but Quinlynn instead drops his healing sleep and Odin gets a nice nights sleep. That evening, everyone dreams of old and ancient things; The world is turning, the ancient is awakening.

Morning, crows have gathered to witness. Ralph gives his ill-fitting leather armor to Odin (bumping Odin from AC 8 to AC 10); After all Ralph had burned down the house that held Odin's chain mail and shield.

As this was a trial by combat and to the death, there was no recovering the body. Odin was dead. Iraco claimed the wolf-spear.

At this point Thomas and Amy arrive; I help walk him through advancing Snips to 1st level. No longer a barber, Snips has learned of magic through Eustace and Quinlynn.

Meeting the King of Elfland

They travel to an ancient grove and find a cleric waiting - we introduce Ah-mal from the Ruins of Ramat adventure.

Ah-mal, a cleric of Cthulhu, sees the adventurers could use healing and joins their cause.

After a few failed healing checks (and creeping disapproval) the Quinlynn invokes the King of Elfland.

Thomas and I have a good role-playing scene:

Quinlyn binds Snips and Ralph to the King of Elfland, picking up a couple of +2 bonus for his next invoke patron.

Iraco learns that Arrick was likely responsible for burning his house (and the neighboring house). The Jarl, frustrated at his villager, orders Arrick to pay a fine of 6 cattle (120 GP). Failure to pay by the next evening would result in being the Jarl's thrall.

Ralph offers and pays the fine on behalf of Arrick. He produces 5 green emeralds (at 20 gp each) and 20 gold coins. The Jarl accepts payment and heads to the manor, where he will collect his portion and pay the rest to Iraco.

Step One of Framing of Iraco

Armond the Armorer approaches the adventurers demanding the remainder of payment for the armor or the return of the armor; The armor that Ralph had likely burned when he set fire to Iraco's house.

The day passes to evening and the community gathers for services from Brother Meacom.

Brother Meacom delivers a pontificating and bloviating sermon extolling the victory of Justicia. An about face considering his previous doom and gloom at an unwinnable situation.

Ungo disguises as an altar boy, accepting offerings, intent on planting the 4 emeralds in Iraco's purse.

Iraco pretended to donate to Justicia by tapping the bottom of the offering plate to make it sound as though he donated coins.

As the service concludes Iraco exits, while much of the congregation remains; Discussing if the adventures lifted the curse.

Arrick approaches the Jarl telling him that Iraco was in the Three Rats Flophouse bragging about nicking some emeralds; The persuasion all holds together.

Jarl Henrick strides out the door and confronts Iraco. Demanding to see his coin purse. Iraco produces the purse, opens it to reveal 4 emeralds. In shock, he drops the purse, and attempts to flee.

Initiative: Iraco loses the initiative. The Jarl grapples him (natural 20). Iraco is taken into custody.

The Road Goes Ever Ever On

Back at the tavern, as evening settles, the adventurers are drinking and planning to leave Hirot. Bull offers to provision them for a few days travel. As evening drifts past midnight, the adventurers pull out the deed and Bull identifies it as a Three Rats (Flophouse). Ralph, without hesitation, rolls it up and says he's going to deliver it to the Jarl.

As Ralph walks up to the great hall; The villagers, all staying awake, realize the hound is dead. The village breaks into song and celebration. The adventurers have vanquished the Hound of Hirot.

The door to the great hall is open. Ralph approaches the Jarl, and offers the deed as a small token of contrition and in homage to the Jarl. (Ralph notes that Sylle Ru is not present in the great hall)

Morning arrives, and the Heroes of Hirot head down the dusty road.