Picking up where we left off, the adventurers had won a game of chess, defeating a ghost and gaining access a protected library. They continued their exploration of The Tower of the Stargazer.

Warning: spoilers of the Tower of the Stargazer

It is a massive room, and Jack asks if he can stumble onto a lucky find. Sure I say. Make a DC 25 Luck check. He gets an 18. And proceeds to burn 4 points to stumble upon a scroll with four scrolls:

Quinlynn takes the scrolls. I forgot to see if he burned them due to his corruption. This was something he picked up earlier in the tower, though I forgot to record it.

The adventurers spends a bit more time searching, and discover this section is all about knots, encyclopedias of creatures from beyond, and communication with other worlds.

After 20 or so minutes, they move on.

The observation platform is rather complicated there is:

The adventurers begin exploring the containers. Using extreme caution (and a 10’ pole), they open the containers. One has gunpowder, the other is full of coal. They try to collect the gunpowder; one of the players insists on putting it in a sack.

Ralph says lets find some glass containers, and they head down to get the bottles of wine. Opening two of the bottles, they pour out drinks for everyone (except the teatotaler dwarf). And they drink what is a delicious and fine vintage red wine.

They examine the open book on the podium, the open page with a picture of an odd mandrake/moss hybrid plant. The text is academic obfuscatory prose overrun with complex punctuation, undue verbosity, and general circuitous descriptions; All while elucidating, nay explicating, xenological conjecturs through grandious epistemological undertone.

Quinlynn examines the book, and in touching it, sets it on fire. Quick thinking Ubexo dowses it with a vial of holy water. Only a mild singe. The title of the book is Flora and Fauna of Necropoli Centauri.

During this time, others are examing the doom. They see a panel that opens, it has traces of coal dust. There are also a few lenses and a place that is clearly meant for the Star Crystal.

They put some coal, and a pinch of gunpowder, in the chamber. The fire starts, and the apparatus hums.

They begin playing with the levers. Ubexo pulls the first, the observatory opens to the lightning storm outside.

Ubexo then pulls the second, and the telescope extends. Pulling the third, the lense cap iris opens. And a faint red beams shoots from the viewing scope to the crystal.

Ubexo pulls the fourth lever, and they hear a “click, click” from the apparatus, and deduce that the lever is for the ignitor.

Satisfied they make their way downstairs.

They return to ask Sir Uravulon Calcidius about the book, and to learn more information. Sir Uravulon will tell them if they free him. The conversation stalls and Sir Calcidius's anger flares up, as he says he'll destroy their souls.

Oh teenagers, and your glorious chaotic behavior! Keith, played by Jose (a high school student), begins alluding to and seeking to free Calcidius. The others jump on him, gag him, and drag him away. At this point, Jose needs to leave. As he is leaving, I let him know that at 3pm on SaturdayI will be running another DCC session. Jose is very interested and keen to play. Unfortunately Alex is also running that day. Jose said he's really liking DCC, and may play it instead of the 5E campaign. I encouraged him to play the 5E campaign.

With that, now Jack (played by Alex another high school student), begins making gestures to free Calcidius. They roll initiative, Quinlynn drops sleep on Jack. The whole time, I'm playing Sir Calcidius as willing to bargain, rooting for first Keith then Jack. Speaking up about their prowess and leadership. And when one fails, he belittles them, and threatens everyone.

And then Travers (also played by Alex) makes a quick gesture, but Ralph is there and ready for murder. Everyone backs down, and the adventurers return to exploration.

Taking the elevator to the 1st floor, they entered a workshop.

There were three spots they explored:

This was an interesting scene as the players explored three spots concurrently. I did quick cut scenes to add to the dramatic unease of a weird situation.

Jack was examining the microscope and slides of blood.

Meanwhile Quinlynn and Ahm-al were examining the cadaver, they noted that it's abdomen was still full.

And the others were looking at the mirrors.

Travers succeeded at a Will save, and I described the slides as fascinating and interesting.

Quinlynn, with his demon claws, cut the gold thread to explore. His keen elven senses gave him a heads up as the intestines animated to attack.

At the mirror, characters were gaining knowledge, increasing ability scores, and hit points. Everyone wanted a turn.

Quinlynn yelped as the intestine struck, wrapping around his through and beginning to choke. With vocal cords constrained he cast a feeble burning hands (1 point of damage).

Normand, who had gained insights gazes into another mirror, which sucks him in; All of this while the intestines are choking Quinlynn.

The others sprung into action, Ahm-al struck with scimitar, and Ralph came charging back, slashing through the intestine and freeing Quinlynn.

With the immediate danger resolved, the adventurers turn their full attention to the mirrors and companions.

Travers gazes into one of the mirrors (the one that granted knowledge) and enters a catatonic state.

Ahm-al fails to command both Normand and Travers to move (see below for details). Ubexo breaks Travers gaze with the mirror, and Travers collapses, asleep.

The adventurers decide to move on. 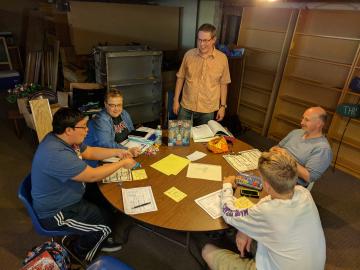 Me running the game for the table

Checking the bound wooden door, Ungo heard moans from the other side. They gathered around, weapons drawn, open the door and ghostly creatures moved towards them. Ungo closed the door and the left it well enough alone.

Opening the iron door, they saw crates upon crates; a hundred or so. They discovered:

When they cracked open a box labeled “Skull of a wife who collected the stars”, sure enough there was a skull packed amongst straw.

Return to the Mirrors

If you throw press your luck mechanisms at players, they will do it. Especially if it means permanent ability increases, extra hit points, extra knowledge.

The adventurers couldn't resist, they returned to the mirrors.

Jack looked into the duplication mirror, and his mirror image jumped out to attack him. Initiative!

It's tight quarters, and as everyone attempts to help Real Jack, I call for Luck tests. Failure means you accidentally look into the mirror.

Quinlynn responds, succeeding on his Luck check, and drops his sleep spell; He gets a 22. He targets both mirror characters. And rolls his 1d6 for healing…everyone gets 1 HP back.

Mirror Jack rolls a 19, and burns 2 more luck to make the save. Mirror Ahm-al fails the save; she could burn luck but as a priest of Cthulhu, why would you deny sleep?

Ubexo dispatches Mirror Ahm-al, but not before real Ahm-al fumbles and misses her sleeping mirror image.

It's a round of misses by Team Real, and mirror Jack again strikes real Jack for 2 HP. Real Jack is down and bleeding out. Mirror Jack jumps, screams who's next, and turns to a puddle of ichor.

The adventurers jump to save Jack. Ahm-al prays to Cthulhu, but again, Cthulhu is not to be disturbed. Quinlynn again drops his healing sleep spell, restoring 4 HP to Jack, and increasing Jack's Trauma from 0 to 1 (see more about Trauma and Retiring).

They descend the elevator to the level labeled 1. Stepping out they see a control panel with 4 switches, three shimmering force fields that obstruct access to 10 treasure chests.

Ubexo thinks about it, and opens his mind to understand the sequence. In doing so, he feels a presence touching the back right side of his skull. He knows the answer to the appropriate sequence, and pulls the levers.

Nothing appears to happen, the force fields are still shimmering. Ralph prods the force field and passes safely through. They proceed to loot the entire treasury.

Some quick divying up, and we wrap up our session.

The Road Goes Ever On

The nearest town of any size, that they've heard of, is Steelhart. It sounds like the next session will be their journey to Steelhart and attempting to convert their wealth into something portable.

Is a is into quite a few things: My favorite bit of advice from James Raggi IV in this adventure is related to books: "Too many odd books in adventures hold actual knowledge. Think of all the nonsense in the paranormal section of your local bookstore. If the supernatural was actually real, do you not think that there would be a lot more fraudulent nonsense along those lines?"

He has also collaborated with Varooth Moss at a previous point.

In looking at the amount of wealth, I'm considering adjusting to the Lamentations of the Flame Princess currency model. But that will be a larger discussion with the table.

Cthulhu resets disapproval when the tides start rising for the day and did not grant spells to: In fact, during this session, Cthulhu answered not a single prayer.

To Normand, who gazed upon himself as the mirror consumed him.