The method that follows is by no means the best or only way to devise an adventure, but it’s a procedure that will do the job for a working GM. This method work best if you’ve already generated a world using the tools in the Sector Creation chapter, but the basic outlines can function even without such support.

A fair disclaimer, as adventure creation is, in my experience, a personal affair. 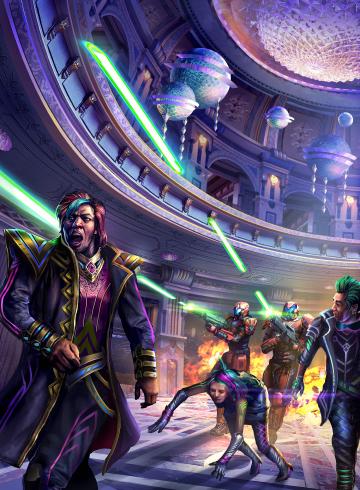 From here, Stars without Number breaks down five steps, common to the writing process.

At the end of the session ask your player’s about their intentions for the following session. But remember, as players are prone to do, hold those intentions lightly.

Review the sector you’ve created. Sift through those Friends, Enemies, Complications, Things, and Places. Bring those forward, tweak them, and look for callbacks to previous adventures. Look for cohesion of these elements.

Create an unstable or untenable situation from those ingredients; A situation that will change as the characters interact with it. Connect problems to people; either Friends or Enemies.

Stars without Number discusses adventures created with in a “sandbox-style” and “story logic-style”. In a sandbox-style adventure, there aren’t written-out paths. You navigate a situation. In story-logic style, the adventuring makes efforts to maintain genre feel.

An advice section for GMs; Have an adventure waiting in the wings. It should be something that demands their immediate attention (e.g. a terrorist attack, a close friend calling for help) and it should be short (less than a session) and simple (and perhaps somewhat isolated). It’s purpose is to help out a GM that is caught flat-footed by player actions.

A discussion about approaching adventure rewards: Not worrying about too much money or keeping them hungry for more money. Instead ensure that rewards are logical (and Stars without Number provides a table with guidance on reward types).

You can use this principle when the PCs want anything, whether it’s a ship, a particular ally, a base of operations, or anything else that can’t reasonably buy. Make them adventure for it. You can give them suggestions and ideas, but it’s up to them to come up with a plan for getting their hands on what they want.

I know as a player that I am somewhat conditioned to “take the adventure path in front of me.” And in my next campaign, I’m certainly going to call out the “Adventure for It” mindset. Adventures in Middle Earth’s creates a separate Adventuring Phase and Fellowship Phase. The Adventuring Phase is very much in the Loremaster’s control, what are the problems in front of the players. The Fellowship Phase is a chance for the Player-heroes choose direction (e.g. train, create a Sanctuary, create a holding, etc.). The Fellowship Phase is used to telegraph what is important and interesting for the players. Not quite “adventure for it”, but it is instead a subsystem that allows players to get off the adventure path and bring more breadth and depth to the character’s context.

Closing this section is a discussion on Awarding Experience Points, with five possible award systems:

Stars without Number provides a series of tables to flesh out a Problem, People, and Places.

A classic case of revenge, with religious considerations, and a chance for PCs to exploit the overall situation. That sounds like a problem that will just keep making problems.

People have tables for: Their Motivation, Their Want, Their Power, Their Hook, Initial Manner of Approach, and Default Deal Outcome.

That dovetails surprisingly well into the Problems roll.

I rolled both Civilized and Wilderness Ongoings, and think both could work as locations for the Problem and Person.

Pulling Problem, People, and Places together, I’m envisioning a preacher that arose from a flock of refugees. They’ve learned the secret about harvesting a drug from the byproduct of the microbes. In their flock, strife broke out (sadism a psychological byproduct of the drug?) and someone was murdered. Both, were in fact trying to smuggle the microbe off-world.

Adventure Seed has a d100 table. This table stands separate from the Problem, People, and Places.

Rolling on the table I got:

A courier mistakes the party for the wrong set of offworlders, and wordlessly deposits a Thing with them that implies something awful—med-frozen, child-sized human organs, for example, or a private catalog of gengineered human slaves. The courier’s boss shortly realizes the error, and this Enemy tries to silence the PCs while preserving the Place where his evil is enacted.

Looking at the results, substitute Enemy and Thing with one of the Enemy and Thing from generated sectors; In the case of a Pilgrimage Site system, I might choose the Enemy as the “Saboteur devoted to a rival belief” and the Thing to be “Precious offering from a pilgrim”.

An Example of Adventure Creation

I found this section to be a nice “transparency in thought” exercise in using the random tables provided. Use the tables to spark ideas. With each roll, interrogate the results to understand why that result is true.

Another great chapter to add to a GMs repertoire.