Stars without Number‘s Xenobestiary chapter sets the tone by reinforcing a sandbox-style play. The following paragraph opens the discussions about encounters; Give players notice about looming hellbeasts; Street thugs won’t likely fight until the bitter end; And most importantly, reiterating that combat is dangerous!

Before picking foes from this chapter, however, a GM should make sure that the enemies chosen and the perils generated are appropriate for the situation. This does not mean that the enemies have to be an “appropriate” combat challenge for the PC group, one that they have a reasonable chance of defeating. It means that they should be appropriate to the location and role they fill in the setting.

From here, Stars without Number dives into the Reaction Roll: its usage and importance—“they help a GM adjudicate a situation in a potentially surprising or interesting way.”

A brief discussion on the degrees of danger, with a reminder that when the GM should ignore the PCs when setting an NPCs potency.

Then we dive into the stat blocks. First off a “Humanity” section. Below is a table of general stat blocks as reference. 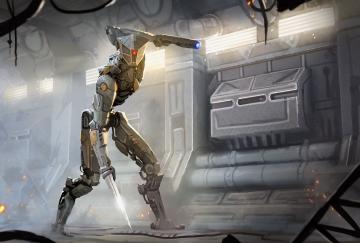 This section dives into Robots and Virtual Intelligences (VIs), clarifying that each sector, and by extension campaign, has a varying presence of robots. With one clarification, True AIs are almost impossible to create in bulk (but they can exist, and have their place).

If something is outside their programming, they need to make rolls against confusion. They are also destroyed if dropped to 0 HP.

Virtual Intelligences cost 10x their Expert System counterparts. Dropping to 0 HP does not destroy VIs. Some VIs are capable of learning; players can choose to be a VI character.

To be a VI, a character must spend their free focus to pick one of the origins: Android, Worker Bot, or Vehicle Bot. Everybody wants to play Crushinator.

A quick chapter on basic beast stats, and random tables for styling your beasts. One benefit of using SWN, is its immediately compatible with other OSR products. So grab The Random Esoteric Creature Generator for Classic Fantasy Role-Playing Games and Their Modern Simulacra and make some alien creatures.

The last section goes into Aliens. And as with most sections, Aliens are entirely optional. Or limited to non-player characters. Or playable by players.

When adding an alien race to your sector, it’s necessary to keep in mind the ultimate purpose you have for including them. A given species might be fascinating to you, but if they don’t actually help to accomplish something for your game it’s likely that the players will simply gloss over their existence. By having a concrete purpose in mind for a race you can ensure that the players have a useful reason to interact with them.

I’ll roll up two of them…Subtlety and Journeying.

This species has an incurable wanderlust. Perhaps they roam the stars in fleets of massive spike drive ships, or they may make steady circuits of the nearby stars to connect their worlds and exchange people among them. More technologically primitive species might sail the waves of alien seas or make nomadic journeys across the continents of their world. Few of these aliens can ever be happy in remaining in one place for long, and they are forever scouting new worlds and new lands simply for the pleasure of being there a little while.

Such a species is enormously cunning and patient in character, willing to endure years of suffering calmly in order to bring about some intricate plan. They shun open display of emotions or opinions, masking such things behind protocols of bland correctness. To reveal one’s true opinion about some contentious matter is a mark either of profound trust or a sign of obvious incipient treachery. The true ruler of such a species is almost never who it seems to be.

Imagine a species of tacit travelers, always in the background of space stations and transport ships, tourists each and every place. Yet reserved and distant. How would humans react to these silent travelers? What conspiracies might run rampant?

Especially, when we roll up their social structure: I got a monarchy. Why do they travel? How do they demonstrate allegiance? What does the monarch desire of this sector?

Stars without Number further discusses Alien Technology. Some may be primitive, others contemporary, and fallen alien technology could be “magic”.

Last, there are rules for making Alien characters; This is some work on the GM and Players part; And is frankly something I wouldn’t allow in the first batch of characters for a new campaign.

There are a few more chapters to go, but I love the short stat blocks. I despise multi-paragraph stat blocks (adding lots of unnecessary overhead to GM-ing).

I very much appreciate the discussion about Alien Lenses; How to make something not human (while building on an exaggerated human emotion/approach).