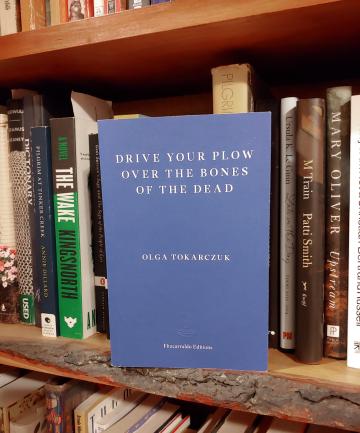 In seed-time learn, in harvest teach, in winter enjoy.
Drive your cart and your plough over the bones of the dead.
The road of excess leads to the palace of wisdom.
Prudence is a rich ugly old maid courted by Incapacity.

Listening to Golden Hare Books’ “Bibliophile” podcast, one of the hosts made mention that they read “Drive Your Plow Over the Bones of the Dead” by Olga Tokarczuk. After a quick synopsis, I resolved, about three months ago to pick it up. Murder during the winter in a remote Polish village and animals unionizing to carry out justice. It remained on my wishlist, but I stumbled through other distractions, never ordering it.

Earlier in June, I presented at Open Repositories 2019 in Hamburg, Germany. I flew out by way of Chicago, Illinois to Warsaw, Poland to Hamburg, Germany. On my return flight, while in Warsaw, Poland, I did a quick pass through their bookstore. In the English section, I found “Drive Your Plow Over the Bones of the Dead” by Olga Tokarczuk. Jackpot!

I bought it and stashed it in my carry-on backpack. I had already started “If on a Winter’s Night a Traveller” by Italo Calvino and resolved to finish before diving into a new book.

Somewhere over Norway I completed “If on a Winter’s Night a Traveller.” I opened my backpack, pulled out the simple blue copy of “Drive Your Plow” and began reading…

I am already at an age and additionally in a state where I must always wash my feet thoroughly before bed, in the event of having to be removed by an ambulance in the Night.

Had I examined the Ephemerides that evening to see what was happening in the sky, I wouldn’t have gone to bed at all.

In those two sentences, I see the promise of an older narrator plagued by ailments Later the narrator calls these out as her “Ailments” , consulting on astrology or superstition, injury or accidents, insomnia or night time activities, and placing weight on concepts. I read “Night” as an invocation of night’s true nature within the world; Reminding me of William Blake’s quote, “I must create a system, or be enslaved by another man’s. I will not reason and compare: my business is to create.”

And “Drive your Plow” delivers on these insinuations.

Outwardly, it’s a classic murder mystery that starts with a dead body, of course. But it’s a book to be read on lots of different levels. You can stay at the level of the crime novel, but you can also go a bit deeper and read it as the story of a decent, law-abiding person’s revolt when she suddenly discovers that the law that’s in force is immoral. The story is narrated by an eccentric woman in her mid-to-late-sixties, and there’s a lot of black humour in it.

As I turned the pages, the narrator (and author) pulled me into their pastoral world shaped by the narrator’s own eccentricities. Living in near isolation during the winter months in a small mountain village, the narrator describes her routines and astrological-based conjectures on murders now plaguing the village. She also talks of William Blake, teaching children, and a conspiracy that the animals are rising up against people.

That this novel caused such a stir in Poland is no surprise. There, the political compass has swung violently to the right, and the rights of women and of animals are under attack (the novel’s 2017 film adaptation, Spoor, caused one journalist to remark that it was “a deeply anti-Christian film that promoted eco-terrorism”). It is an astonishing amalgam of thriller, comedy and political treatise, written by a woman who combines an extraordinary intellect with an anarchic sensibility.

Finishing “Drive your Plow” brought me deep satisfaction. The author conjured a vibrant world and gave the narrator a depth of character, rich in history.

I encourage anyone to read “Drive your Plow Over the Bones of the Dead.” Olga Tokarczuk provides masterful story telling, character development, and crafting of believable space.