We live surrounded by ideas and objects infinitely more ancient than we imagine; and yet at the same time everything is in motion.

In 2002, Wizards of the Coast announced a campaign setting search. They offered a $100,000 reward for the selected campaign. As a dutiful D&D geek, I submitted my campaign. Fortunately, the team at Wizards of the Coast chose Keith Baker‘s submission and developed Eberron. For those interested in a bit of a retrospective on the selection, listen to Manifest Zone’s Fifteen Years of Eberron episode. Keith Baker, Chris Perkins, Bill Slaviseck, and James Wyatt talk through the genesis of Eberron.

Since the release of Eberron, I have followed the product line. I have a complete set of the 3rd Edition RPG supplements (and a spare Eberron Campaign Setting), most of the paperback novels, and the vinyl 4th Edition map. Once upon a time, I had the 4th Edition Eberron books. In protest and disgust of 4th Edition, I sold all my 4th Edition books, including the Eberron books. For all of my love of Eberron, from 2011 until 2019, I didn’t write much about Eberron.

With my current Tomb of Annihilation campaign drawing close to the end, I have started thinking about the next steps. As always, Burning Wheel creeps into my brain; As does Stars without Numbers. See my “Let’s Read “Stars without Number”” series Given that we have a 5th Edition game, I think it makes sense to explore 5th Edition options. 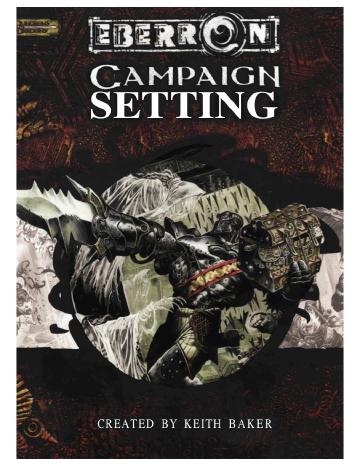 The Eberron Campaign Setting (ECS) establishes a world catching its breath and ready to shift into motion. Each time I have read up on the Eberron campaign setting, I have stepped back both in awe and somewhat intimidated. In awe because Eberron feels like a believable campaign world, in which various factions and power-levels operate. And intimidated because Eberron presents a complex current state and inter-connectedness of its players.

Each time I have approached Eberron, I started from a single point. From that single point, much like Wikipedia, I traveled many paths. I wanted to account for the factions present in the campaign, but there lies a way to madness. Eberron’s breadth and splendor distracted me.

As I started listening to Manifest Zone, I began reshaping my approach to Eberron. And Keith Baker post on Starting a New Campaign drove this home:

I usually won’t try to squeeze every significant power group in Eberron into a campaign. I’ll usually focus on one of the more obvious groups—the Emerald Claw, the Aurum, the Cults of the Dragon Below—as an initial antagonist; choose one of the more subtle and powerful foes—The Dreaming Dark, the Lords of Dust, the Daelkyr—as a long-term enemy; and pick another group—the Lord of Blades, Miron’s Tears, House Tarkanan—as a wild card who could become an ally or an enemy.

I need to resist the idea of introducing everything. Judd Karlman’s Daydreaming about Dragon’s episode about Campaign Building speaks to this. He riffs on Carl Sagan’s quote “If you wish to make an apple pie from scratch, you must first invent the universe.” Let alone using everything. With that in mind, I started exploring an Eberron campaign. I want a contrast from our Tomb of Annihilation; I want the characters to have a place to call home.

My focus settled first on Droaam, spurned by a recent Manifest Zone episode on Droaam. 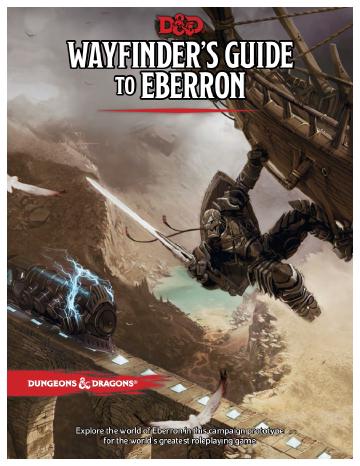 The Wayfinder’s Guide to Eberron provides rules for running a 5E campaign in Eberron.

I asked myself, what is happening in Droaam?

Within the borders of Droaam live long-standing targets of persecution from the Church of the Silver Flame. Who might fan the flames of ideology?

The city of Sharn, in neighboring Breland, copes with people from Droaam. A brutal crime syndicate of Droaam expatriates seeks to usurp the long-standing Halfling crime syndicate.

As an unrecognized nation, the Treaty of Galifar does not apply within Droaam. Who all might be hiding out in Droaam?

With those sparks, I chose to further focus on Greywall, a city in Droaam on the border of Breland. I spent an hour or so on Sunday morning with journal and pen writing up some ideas. I find brainstorming on paper far more effective; I don’t self-edit. I end up recording everything, good or bad.

Inspired by Keith Baker’s notes on his Hope campaign and running in Q’Barra, I spent some time fleshing out ideas for running there.

I have two campaign frameworks to pitch to my players. From there, we’ll build out our upcoming campaign. With my DCC experience, I know that creating generative tables helps fuel a campaign. I would love to see someone hack the Stars without Numbers faction system to fit into Eberron.