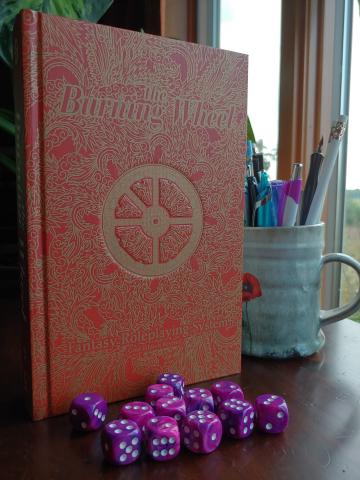 Gunter, a knight in heavy armor, learns of a gathering of cultists in a longhouse. They are plotting and scheming. With crossbow drawn, intent on testing their disposition, he bursts into the longhouse. Four cultists snear and howl invectives. A Fight! ensues. Gunter begins with 1 Persona and 2 Fate. All combatants have Black shaded dice for all rolls (4,5,6 on a d6 count as successes)

Sep 9, 2019 update: Playstorming is a misnomer. This is a solo playthrough.

Sep 9, 2019 update: For those looking for other Fight like playthroughs, I do have an old session report that eschewed fight for declared actions and speed tests.

Sep 9, 2019 update: And thank you Burning Luke for pointing out that I had mispelled Duchy as Ducky.

Gunter, with a Crossbow, vs. four cultists, each currently unarmed. To reflect their disorganized nature, for the initial engagement and first exchanged, I'm goint to script each cultist separately. Then I'll shift them to a horde of mooks.

Based on Table 163: Initial engagement roll for Gunter and the Four Cultists , Gunter successfully positions himself against all of the cultists. While Gunter has a loaded crossbow, all of the cultists have a +5 Ob on attacks and special against Gunter.

As a quick ruling, each success for the physical action will increase the difficulty of the crossbow shot.

Referring to Table 164: Script for Exchange One between Gunter and the Four Cultists , the cultists are seeking cover, Gunter's firing his crossbow, and all of them are then drawing melee weapons.

Consulting Table 165: Exchange One, Volley One for Gunter and the Cultists , with some quick scampering, the cultists flip tables. With a quick eye, Gunter fires a crossbow at the slightly too slow 2nd cultist.

With three successes, Gunter chooses to add 1 to the Die of Fate to determine the crossbow damage. I roll a modified 7. That's a B11 wound to Cultist 2. Looking at the PTGS table, that exceeds the Cultist's mortal wound threshold. Down in a gurgle. The remainder of the exchange is each combatant drawing weapons.

Unphased by the demise of their co-conspirator, the remaining 3 cultists vie for position. To simplify the combat, I choose to have each of the cultists help each other (and script them as one entity).

Checking Table 165: Exchange One, Volley One for Gunter and the Cultists , the cultists and Gunter each get 3 succeses. However, ties favor the longer weapon. Gunter has them at his advantage with an axe. All attacks against Gunter suffer a +2 Ob.

The cultists know that they need to get within Gunter's reach. Gunter figures his weapon can hold them at bay, but 3 against 1 is never simple.

From Table 167: Script for exchange two between Gunter and the now Three Cultists , Gunter looks to play it safe and see their intentions. The Cultists want to close and knock out Gunter's positional advantage.

Resolving Table 168: Exchange two, volley one, action one between Gunter and the now three cultists , Gunter deftly avoids the charge of the cultists. The cultists hesitate for their second action and Gunter strikes.

Looking at Table 169: Exchange two, volley one, action two between Gunter and the now three cultists , Gunter tags Cultist 1 with an incidental hit (B4), inflicting a superficial wound. I rolled 6,5,2,1. I considered spending Gunter's last Fate point to explode the six, but I'm looking cautiously at the combat. The +1 Ob will only apply when each cultist has a superficial wound.

For Table 170: Exchange two, volley two, action one between Gunter and the now three cultists , Gunter shifts to a defensive position, avoiding the cultist's locks.

To summarize, Gunter has 1 Fate point and 1 Persona remaining. Gunter shifted to a defensive stance. Two of the cultists have sustained superficial wounds.

Looking at Table 172: Exchange three positioning roll for Gunter and the now Three Cultists , the cultists succeed at positioning with knives. Gunter, with his axe is at +2 Ob for attacks. Here's where things get dangerous for Gunter.

In Table 174: Exchange three, volley one, action one between Gunter and the now three cultists , the dice betray all players.

Looking at Table 175: Exchange three, volley one, action two between Gunter and the now three cultists , fortune shines on Gunter as he presses his luck, and beats his opponent back. He now has the positional advantage.

From Table 176: Exchange three, volley two, action one between Gunter and the now three cultists , Gunter deftly avoids a lock. Now comes an unopposed Lock from the Cultists.

Resolving Table 177: Exchange three, volley two, action two between Gunter and the now three cultists , the Cultists cannot get a lock. And here's where things should go sour for the cultists. Starting with positional advantage, the cultists were hoping to have crippled Gunter with a series of locks. Alas, Gunter flipped the advantage to him.

For this action, it would've made sense for the Cultists to forfeit their last action. They would've been standing and drooling, which means the Counterstrike would've been wasted.

The remaining two cultists each have a +1 Ob penalty for their superficial wound. As a GM, I am comfortable invoking Let it Ride and asking Gunter's player to narrate the remainder of this scene.

For Counterstrike, when you split the pool, I'm assuming that you record a single test using the sum of your dice AND treat the obstacle as whichever you prefer.

Based on the “Series of Rolls = One Test” section in “Burning Wheel Gold Revised” (p45), Gunter can record one test per skill or ability used.

Gunter will record a challenging Speed test, a routine Crossbow test, and can choose either a routine or difficult test for Axe.

Leading with a crossbow instills a proper fear. As I thought through the actions of the cultists, I had to think “Well, what do you do?” Gunter had a +5 Ob positional advantage until he loosed a quarrel. Would these crazed cultists flee? No, because that's not the purpose of this playstorm. But would a player character seek cover and flee? I'd imagine so, and would be scared shitless for that round.

Don't bring a knife to an axe fight, the positional disadvantage works heavily against you. Related to that, do what you can to gain positional advantage.

I chose to play Gunter cautiously, and more than once his positional advantage prevented the cultists from succeeding at their action.

Think about what your character wants. The cultists thought they could use their superior numbers to overwhelm Gunter. Gunter was prepared to dispatch them, but had to bide his time and settle for incidental hits. A 1D lock may well have ended the whole thing. Were I running this for players, I would hope that I'd remember as a cultist that I'd be hissing about getting a sacrifice.

Mooks or individuals? Burning Wheel Gold Revised provides guidance either for mooks fighting as one, or for scripting each combatant. In this case have two groups of two could've proven interesting. However, I would want some semblance of randomization for picking actions, so as to not overly coordinate their actions.

A solid defense can buy you lots of time. Either so you can seek to disengage or hold off until the cavalry comes. Drop into a defensive stance early and hope your luck holds out.

Working through Fight! requires a lot of initial patience. Fight! is verbose and intricate. Taking time to get it right is imperative. As a corollary, heed Burning Wheel's advice: Don't use Fight! right away. Instead settle for single tests, clarifying task and intent.

In the above scenario I see a linked test. First, Gunter's going to get the drop with his crossbow. If Gunter succeeded, not only does he dispatch one of them, but he gets +1D for the ensuing conflict.

Then he wants to dispatch them with his axe, relying on his armor. The failure complication that I see would be “If you fail, the cultists will subdue you and bring you as an offering to their dark god.”

Gunter, rolling 3D for crossbow gets 3 successes (which is one over the Ob 2 difficulty). Then gathering dice, Gunter has 4D for Axe, +1D for the linked test, +1D advantage for a longer weapon, +1D advantage for armor. The cultists have 5D for brawling.

This could work, and I'd leave it up to the players; Especially looking to see how that conflict aligns with their beliefs.

As a GM, I feel much more confident that I could successfully bring Fight! to the table. I'd make sure to let players use the optional rule of forfeiting an action to script Avoid or Block.