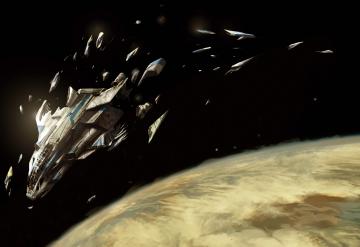 Several nimble spaceship fighters swarm a large space cruiser, each firing lasers at the other. (Take 2)

A skill rank of 3 amongst the PCs assumes all characters are at least 6th level; These are not your first level characters.

Once again the free merchant Waukeen finds itself chased by the Roscoe, patrol boat. The Waukeen would love to blast out of this system but frankly tires of the Roscoe's antics. Per orders, the Roscoe wants nothing more than to board the Waukeen and inspect it for contraband.

This time, the Roscoe gets the initiative.

The Roscoe Seeks to Take Out the Spike Drive

Not wanting the Waukeen to escape, the captain of the Roscoe orders their crew to disable the Waukeen's spike-drive. Roscoe's Comm station defeats the Waukeen's electronic countermeasures (ECM). And the Gunnery station threatens the spike-drive, but the Waukeen instead accepts a crisis.

End Result: Instead of taking a hit to the Spike Drive, the Waukeen accepts a Crisis: System Damage, disabling the Sand Thrower.

The Waukeen Tired of Running, Strikes Back

Result: The Sand Thrower repaired. The Waukeen halved the Roscoe's Armor rating (down to 2, making the Sand Thrower a far more dangerous weapon). But the captain imposed a “Crew Lost” crisis.

The Roscoe's captain, perhaps a bit brazen, insists that the Gunnery disable the spike-drive of the Waukeen. The comm officer again delivers a brilliant attack on the Waukeen's ECM, but Gunnery cannot connect. At this point, with the Waukeen firing back, the Roscoe perhaps should have fired without intention. With a roll of 7, the Roscoe would have still missed.

The Waukeen Blasts Away at the Roscoe

The Waukeen's captain, demands that the crew muster all they have to take out the Roscoe's plasma cannon. In perfect order, they rally and disable the plasma cannon. The Gunnery tacks on a few points of damage to highlight that they mean business.

Result: The bridge resolved their crisis, only to be thrown right back into a “Crew Lost Crisis.” The Waukeen disabled the Roscoe's plasma cannon. And inflicted 2 HP.

Without its plasma cannon, the Roscoe cannot achieve its goal. The captain orders repairs from engineering and for the bridge to take evasive maneuvers.

I Have You Now

Seeing the Roscoe struggling to bring its cannon online, the captain orders that the Gunnery station destroys the cannon. Through the aid of the defeated ECM, the multifocal laser connects and destroys the plasma cannon.

With the Roscoe's plasma cannon disabled, the Waukeen beat a hasty retreat. Perhaps they picked away at the Roscoe. Regardless, they popped the space champagne and celebrated a comfortable victory.

I have since played through two-ship combat scenarios. I have not run the Space Combat subsystem at an actual game table. I mentally compare Diaspora‘s space combat mini-game to Stars without Number's space combat; More on that in a future post.

For this scenario, with an assumed Lead skill of 3, it seems logical for the captain to always take the “Into the Fire” action. I cannot deny the allure of gaining 4 command points (CP) at a future cost of one or two actions.

With a Warrior at the Gunnery station, the opposing crew will face a crisis. Warrior's have the following ability: “Warriors are lucky in combat. Once per scene, as an Instant ability, you can either choose to negate a successful attack roll against you or turn a missed attack roll you made into a successful hit. You can use this ability after the dice are rolled, but it cannot be used against environmental damage, effects without an attack roll, or hits on a vehicle you’re occupying.” The PC abilities ensure that their ship poses far more of a threat than an NPC counterpart.

Defeat ECM shines with Programming-3. Converting two command points for a +6 to hit makes tremendous sense when you can reliably bank eight command points. With 8 CPs you can get a +6 to two targeted shots.

I have played under Stars without Number's recommendation that an NPC ship may use one crisis per combat. A patrol boat presents an easy target for a skilled crew. With its single, yet hard-hitting weapon, it appears that a patrol boat is under matched for a PCs bulk freighter.

A single patrol will likely not challenge a crew of sixth level characters. With so many options to generate command points and re-rolls, the PCs can press hard for their desired outcome.

You need multiple weapons for your ship to be a threat. It took quite a bit of effort to disable a single plasma cannon. During that time, the Waukeen did not appear to be under any immediate danger.

I find myself thinking about Diaspora's space combat. In particular the simple yet varied elements to track: position on the map, hull stress, data stress, and heat stress. Position, hull, and data are resolved via versus tests. Heat is a resource that you can use to boost your speed or beam weapons (which can serve as offense and defensive capabilities). Within those asymetrical options, emerges what feels to be very meaningful strategies.